Technology Recreates What Jesus May Have Looked Like at Age 12

In May 2019, I was interviewed by Eric Ray and Glenn Langenburg for The DoubleLoop Podcast. We discussed forensics down under, some...
Read more
Crime Scene News

The Simple Math of Why Smaller Bullets Are Deadlier

The long range rifle has been around since the 19th century, a short 100 years after Daniel Bernoulli published his book, Hydrodynamica, on the relationship...
Read more
Case Studies & Stories

Alison Davidson is a kind of olfactory Sherlock. A quiet but crisp scientist who runs the forensics lab at the University of Staffordshire, she...
Read more
Case Studies & Stories

The Art of Crime

Michael Whyte
Crime Scene Officer and Fingerprint Expert with over 12 years experience in Crime Scene Investigation and Latent Print Analysis. The opinions or assertions contained on this site are the private views of the author and are not to be construed as those of any professional organisation or policing body.
- Forensic Podcast -

Using the same technology that adds wrinkles to the drawings of Mafia bosses to identify them after decades on the run, the Italian police have shaved years, and a beard, off an image taken from the Shroud of Turin to create what newspapers here this week hailed as the very visage of a young Jesus.

“Here it is, the real face of the baby Jesus,” declared the front page of the newspaper Il Giornale. Italy’s largest newspaper, Corriere della Sera, ran a more cautious headline, “Here Is Jesus at Age 12 (According to a Computer).”

In a country awash in crèches and sensationalism, exposés and revelations about the birth of Jesus are not exactly rare. This week, RAI, the government-owned television and radio company, broadcast “Inquiry Into the Birth of Jesus,” not to be confused with “Inquiry Into the Baby Jesus,” a book selling across Italy.

But few reports have generated as much discussion as the image in Thursday’s newspapers. 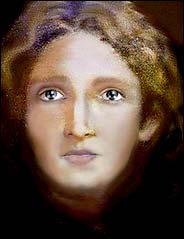 The angelic face is reminiscent of the prayer cards sold in Vatican souvenir shops and of the New Age portraits displayed at Venice Beach. The image shows a 12-year-old boy with fair, smooth skin, glassy blue eyes, fleshy lips and waves of dirty blond hair streaked with just enough purple and pink to suggest a sprinkling of cosmic dust.

The scientific unit of Rome’s police force created the image at the behest of reporters of another investigative report about Jesus to be televised the night after Christmas. For that program, the police took photographs from the Shroud of Turin and subtracted about 20 years of aging.

“It came to us an illumination, maybe it was inspiration, What was his face like?” said Elena Guarnieri, the host of the news special. “If that is the face on the shroud, then this is the face of Jesus as a child.” 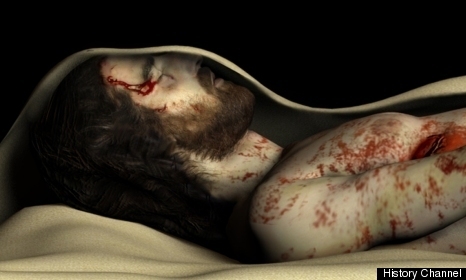 Millions of Christians believe that the Shroud of Turin, a linen cloth imprinted with the image of a man’s face and wounded body, is the burial shroud of Jesus. But after using carbon-14 dating tests in 1988, a group of scientists dated the cloth between 1260 and 1390, and ruled that it was probably a medieval forgery.

Paul Damon, a geoscientist who was a member of the 1988 testing team at the University of Arizona in Tucson, had serious reservations about the methods the police used.

“I think that it’s malarkey,” he said. “The church never denied the dates,” he added, referring to the scientists’ findings about the shroud.

The Vatican refused to comment about the face of the 12-year-old Jesus, but Professor Damon expressed bewilderment. “The boy would not be blond,” he said.

Ms. Guarnieri acknowledged that the fair complexion was a bit fanciful, but said the features counted most. She noted that the image of a wooly beard present on the shroud hid the jaw and cheeks and thus forced the police to reconstruct the lower half of Jesus’ face.

She also noted that when the police added receding hairlines or wrinkles to mobsters, they had family photographs to work from. They had no such genetic information handy about the parents of Jesus.

“It’s very difficult, because it happened many years ago – we’re not magicians,” Ms. Guarnieri said. “But I am a journalist, and this is based on truth. It’s a discovery.”

Share
Facebook
Twitter
Pinterest
WhatsApp
Previous articleUsing a smoothie supplement to dust for fingerprints
Next articlePeople about to commit a crime shouldn’t throw stones… Why? Because we can get good fingerprints off them!
- Advertisement -

Three months after his bone marrow transplant, Chris Long of Reno, Nev., learned that the DNA in his blood had changed. It...
Read more
Case Studies & Stories

This National Crime Information Centre (NCIC) Bayesian network is based on the statistical data of general patterns of fingerprints on the hands...
Read more
Fingerprint Research

Adhesive tape is a common item which can be encountered in criminal cases involving rape, murder, kidnapping and explosives. It is often the case...
Read more
Fingerprints

This video gives the fingerprint technician some ideas on how to present a Fingerprint Comparison result to the court that looks professional. To accomplish this...
Read more
Fingerprint Research

In sexual assault and burglary investigations, the recovery of DNA from items that have been handled by the suspect is very important....
Read more